Basaija Idd
Youth in Obusinga Bwa Rwenzururu-OBR cultural institution planted trees and staged a climate change walk in commemoration of the Sunday 27th November 2016 Rwenzururu palace attack.  The youth said that they want the Rwenzurur King Wesley Mumbere to find a better and well-conserved environment once he returns homes.

Sunday marked six years since the raid on the Rwenzurur palace, which climaxed with the arrest of Omusinga Charles Wesley Mumbere and 203 others.  The raid on November 26 and 27, 2016, was carried out by the Uganda People's Defence Forces- UPDF under the command of the then Second Division Commander, Brigadier Peter Elwelu.

The attack came after the Rwenzururu King refused to hand over the guards whom the army accused of engaging in clandestine activities.  More than 100 people lost their lives in this raid. The group was later arraigned before a court in Jinja on 41 counts of treason, terrorism, murder, attempted murder, robbery, and malicious damage to property.


Although Mumbere and some of the accused Royal Guards were granted bail in previous applications, 84 members of the suspects have remained on remand. The youth argued that even in the absence of the King they must own the responsibility to conserve, protect and defend the development of the institution. URN brings you the pictorial.. 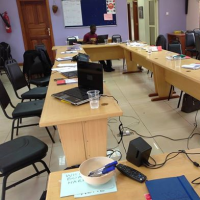